It was decided to extend the satellite transmitter program to Whimbrel in 2017, with five 5g units being deployed at both 80 Mile Beach (one bird) and at Broome (four birds). In addition, recently released 2g transmitters, developed by Microwave Telemetry Inc. (MTI), were deployed on five Grey-tailed Tattler at 80 Mile Beach. This was carried out during the NWA 2017 Expedition, in February 2017.

Follow the link to read update 1 in a series of updates regarding the satellite tracking of the Whimbrel and Grey-tailed Tattlers as they prepare to depart our shores for their northern breeding grounds. 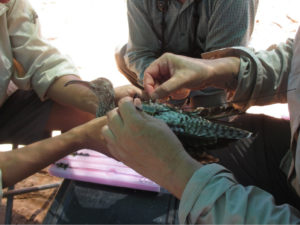