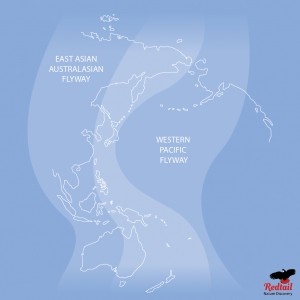 Flyways are broad corridors used by migrating birds. For waders (shorebirds) birds eight flyways have been defined in the world. Three flyways are important for migratory waders in the Asia Pacific region. These are, (from East to West), the Central Pacific, the East Asian-Australasian, and the Central Asian Flyways.

Some species or individuals cross from one Flyway to another. Thus in the East Asian-Australasian Flyway Ruffs breeding in East Siberia are known to migrate westwards to Europe and Africa joining the East Atlantic Flyway. Grey Phalaropes and Pectoral Sandpipers breeding in East Siberia mainly migrate to spend the non-breeding season in South America in the Pacific Flyway.

Flyways are a useful concept for the management and conservation of migratory wading birds. The birds often use many countries within a Flyway during their migrations. It is of limited value to use large resources protecting them in one country, if they are not also protected in the other countries through which they migrate, or where they spend the breeding and non-breeding seasons. Conservation agreements are made between countries which are based on the principle of shared birds within a Flyway.