Thank you for contributing to shorebird research studies in the East Asian-Australasian Flyway.  The information you are helping to collect is incredibly valuable for scientific and conservation purposes.

Submit your sightings to the Birdmark Portal

The new BirdMark portal is specially designed for resightings of colour marked waders along our flyway.

The BirdMark site went live in February 2021. It contains banding and flagging data from the VWSG. It also contains data from the Australasian Wader Studies Group, Global Flyway Network, Northern Territory wader study group and Queensland Wader Study Group, as well as observations from throughout the flyway.

In 4 different languages it offers the possibility to enter and submit your observations both interactively or as a file. Videos on the various ways in which you can do this are included in the site’s “Help Guides”. Feedback on your observations, including a history of the birds that you have observed, will be returned to you within a couple of days of submitting your data (see example feedback).

With the launch of this site we hope to further boost the reporting of marked shorebirds, which is crucial for ongoing conservation and scientific research, informing on the birds’ population dynamics, movements and site use. 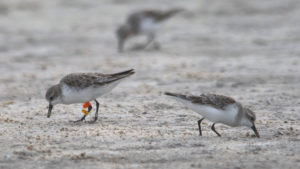 Please note the old AWSG flagging email is no longer in use.

The program of flagging waders has revolutionised wader migration studies. The flag is a small coloured plastic band with a tab on the end. Unlike with banding, the bird does not have to be caught to find out in which region it has been banded.

The program started in Australia in 1990. A flagging protocol has been developed for the Flyway, which enables any country, or in some cases regions within a country, to join the scheme.

It is recognised that there is a need to coordinate all colour marking activities for migratory birds throughout the flyway. In this protocol we have attempted to deal only with colour flagging of migratory shorebirds. If the principles embodied here are accepted by all bird banding schemes and researchers, it would then be appropriate to also attempt international coordination of colour banding in the East Asian-Australasian Flyway.

Information on the Colour Flagging Protocol can be found here..

An easy to use Colour Chart of the leg flag colours currently ‘in use’ can be found here..

For birds from Victoria, S.E. Australia, the reporting rate from flagged birds is 17 times that of banded bands, and for N.W. Australia 5 times. Also flagged birds can be watched for anywhere, as opposed to banded birds for which most recoveries only come from a few areas where there is much hunting or banding activity. For some species and localities in the Flyway where there have been many flag sightings it is now becoming possible to find out the timings of migrations of birds from different origins (i.e. N.W. and S.E. Australia: Alaska and Siberia) through the same area, and even to make estimates of the proportions of the total populations passing through.

All countries starting flagging are urged to follow the protocol. This has been carefully worked out to ensure that all researchers throughout the Flyway benefit from the program, and do not destroy other people’s research, (and their own), by not following the protocol.

Totals of flagged waders in Australasia

Up until 31 December 2002 114,501 waders have been flagged in Australia since flagging commenced in 1990 as shown in Flag totals chart. The majority of these were flagged in Victoria (55,186) and Northwest Australia (51,604). A total of 38 species of migratory waders have been flagged, the greatest variety being in Northwest Australia, surprisingly even in species where relatively few have been colour marked, there have been a significant number of distant flag sightings.