Doug Watkins, Chairman of the Australasian Wader Studies Group, has been selected as the Chief Executive of East Asian-Australasian Flyway Partnership Secretariat. 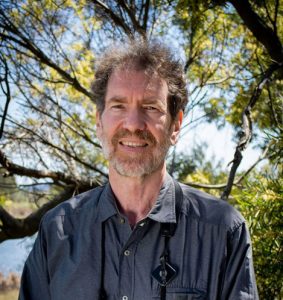 Doug is well known to many in his native Australia, as well as many of those representing the 37  Partners of the EAAFP, for his long history of involvement with the study and conservation of migratory shorebirds in Australia since the 1980s. Firstly with the Australian Wader Studies Group (ASWG) then on the international scene with Wetlands International.

In 1996 Doug was part of the organising committee of the landmark conference ‘Shorebird Conservation in the Asia-Pacific’ in the days leading up to the 1996 Ramsar Convention Conference in Brisbane, providing the impetus for the launch of East Asian Australasian Shorebird Reserve Network a few days later. On that occasion eight countries from the flyway took the significant first steps in publicly recognising 19 wetland sites as critical to the survival of these species. At that time Doug had commenced involvement working with Wetlands International where he stayed until 2013. During that time he was involvement in the lead up to the formation of East Asian Australasian Flyway Partnership (EAAFP). This included working with the Australian Government towards the development of the EAAFP concept during the World Summit of Sustainable Development in 2002, later officially established in 2006. He has been an active and motivated player in the EAAFP since.

During his time at the Wetlands International, Doug was involved in many important projects for the conservation of wetlands and migratory waterbirds in the EAAF, including developing the Asia-Pacific Migratory Waterbird Conservation Strategy, implementation of the Shorebird Action Plans together with various stakeholders along EAAF and leading the development of “Wetland Management Guidelines” with Chinese wetland scientists. He demonstrated his technical expertise from publishing shorebird population estimates and the first listing of sites of international importance for migratory shorebirds across the complete EAAF in 2008. All these works are important knowledge resources which people in the EAAF are still benefiting.

With the new EAAFP 10-year Strategic Plan adopted during the tenth Meeting of Partners, as well as more development in the coming years, we are delighted to have Doug to lead the EAAFP Secretariat and the Partnership towards a bright future. His unflagging energy and enthusiasm over the years will come in good stead in this challenging role.

Doug takes over from a mutual close friend and colleague, Dr Lew Young, who passed away unexpectedly in March this year while at a business meeting for the EAAFP. I am sure Lew would have happily supported Doug’s appointment!